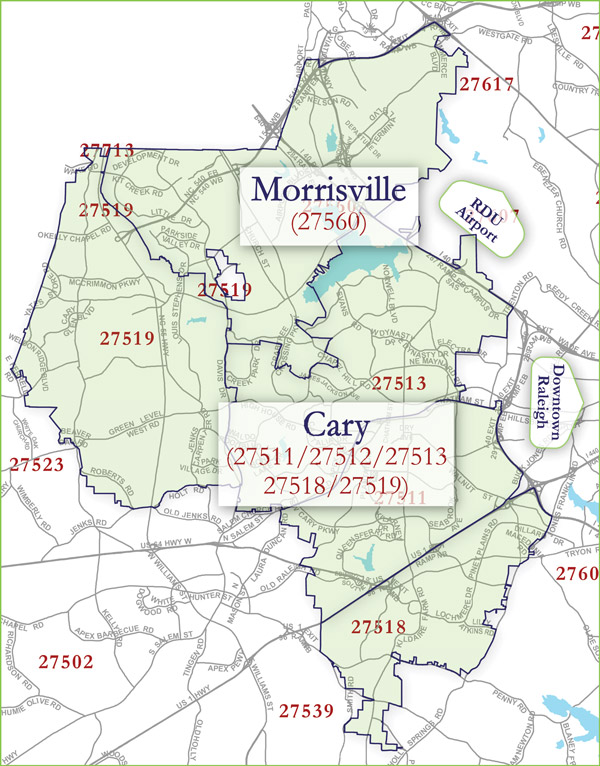 Considering a Home for sale in Cary?

Located southwest of Raleigh, many of Cary’s residents are not native to the area and have moved here because of this town’s clean, friendly and community-minded reputation, as well as for some of the most popular schools in Wake County.

One of the best parts about Cary is that although it’s grown so much in thirty-some years, it still retains its small town feel. Cary residents enjoy convenient shopping, dining, entertainment and arts, and an easy commute to Research Triangle Park. Many of Cary’s main roads have undergone expansions, easing commuter stress.

Living in Cary means friendly neighborhoods, among 60 miles of green spaces, parks and a cutting-edge parks and recreation program that serves all ages. If you play tennis, are an actor or want to take your bicycle out on weekends without worrying about your safety, then Cary may be the home for you.  In addition, the Town of Cary is a NCAA Championship City, which means it hosts Division I, II and III men’s and women’s championships. Cary is also the home of the USA Baseball National Training Complex  and the summer home of the NC Symphony. It’s no surprise Money Magazine ranked Cary as one of the Best Places to Live in the country. Other accolades for Cary include being among the nation’s top cities, and being recognized as one of the Safest Places to Live in America, Best Places to Retire and Best Places to Raise a Family in the United States.

Downtown Cary has experienced a revival in recent years and it’s become a pedestrian-friendly destination for all ages to enjoy the arts, restaurants and festivals, such as the annual Lazy Daze Arts and Craft Festival and the new Ole Time Winter Festival. Every final Friday of the month downtown Cary comes alive with the Cary Art Loop featuring galleries and shops along Academy, West Chatham Street and Ambassador Loop.

Considering a Home for sale in Morrisville?

Morrisville is a small town located right next to the Research Triangle Park (RTP).  There may be less than 25,000 people that live in morrisville, but  the population more than doubles during the day as workers fill area businesses. Thanks to all workers that flood the town, you have dozens of great restaurants to choose from and shopping is plentiful. Living in the shadow of Cary, NC means Morrisville residents have quick access to all the great shopping that Cary has to offer. The Streets at Southpoint is a huge shopping destination just a few minutes up the road as well.

Being so close to RTP makes the area popular with people that want to avoid long commutes and be close to the airport.

The schools are good and quick access to major roads is everywhere. There is a limited  availability of homes priced under $200,000 in Morrisville, but if you can afford to spend $300,000+ then you should find a number of homes that just might fit your needs.

This beautiful and sunny townhome has a spacious open floor plan with hardwood floors, an updated kitchen with granite counters & large dining room—easy access to your ba...

Modern elegance in a traditional setting. Enter into the formal living room, with vaulted ceilings, gorgeous hardwoods and tile throughout, and a beautiful ornate stairc...

Our most popular floorplan is back and it's our model home! The Statesville offers a grand entrance with a two story foyer, curved staircase and 10' ceilings. Large ope...

Click the map below for a zipcode map of Wake County